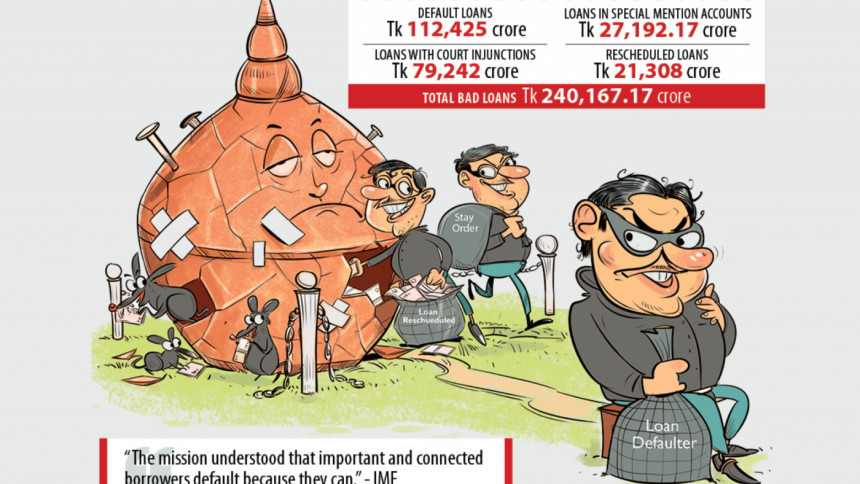 The economic crisis moment is started with the Covid-19 Pandemic, during that time the economic strategy collapsed globally. After the concession made in the collection of bank loans was withdrawn due to Covid-19, loan defaults began to rise, and in the last nine months the rising amount of BDT 31, 122 crores, despite the abundance of available facilities.

Given the current state of the world and native economies, many initiatives, and rewards for periodic playback of sizable debts have not been very effective in halting the tide of defaulted loans.

According to the data of the Central Bank of Bangladesh, the rate of non-performing loans has expanded by 4.4% points at end of the September which is compared to the last quarter of September.

When Abdur Rouf Talukder join as a governor of Bangladesh Bank in July then Bangladesh Bank altered its scheduling strategy and began proposing discounts on down payments in anticipation of a default loan movement.

Prior to the situation, the banking industry experienced a dramatic increase of Tk 11,816 crore in defaulting loans from April and June, the raising rate is 8.96 percent. The raising rate is 0.4 percent compared with the above time.

The data of Bangladesh bank said that state-owned banks have default loans of Tk 60, 502 crores and that’s 23.04 percent of total loans.

For this ground the share of non-performing loans expended by 40 basis points if we compared it with the last quarter.

For the Covid-19 situation, the defaulted loan number raised, and the new strategy of the governor has given lots of facilities as the period of the loans are allowed to reschedule by the debtor.

According to a new circular on 18 July, the defaulters have the facility to reschedule their loan with a down payment and the minimum rate is 2.5%, and the maximum of 4.5% of their outstanding overdue though the prior record for a down payment was 10%-30%. But under special consideration, the debtor could take a discount from the Central Bank of Bangladesh.

On the new policy, the defaulters can reschedule their loans up to four times but previously that’s only allowed for three times.

According to the new policy, the board of directors has the power to grant facilities and rescheduled loans, but previously time this right holder was the Central Bank in the matter of loan rescheduling.

After giving this many facilities of the Central Bank, the rate of the defaulted loan is not decrease.

Regarding the rise in defaulting loans issue, Salehuddin Ahmed who is a former governor of Bangladesh bank said that it was not only required to modify the law, but Bangladesh Bank and the government of Bangladesh should play an effective role equally in executing this issue.