Rahman’s Chambers, as one of the leading firms in this area, provides all sorts of legal support ranging from international banking, complex trade finance, factoring, regulatory matters to security documentation etc. The Chambers have in-depth knowledge, resources, and years of expertise in different critical banking and finance matters. The Chambers for more than ten years advised banks and NBFIs on project finance, bank documentation. As a lawyer of the central bank for nearly 9 years we have advised on forex, banking regulation, credit information, Islamic finance etc. This puts us in a unique & unparalleled position to advise on all sorts of banking transactions to any client.  Chambers and Partners Asia Pacific 2022 for two consecutive years ranked us for Corporate and Finance. Their 2019 editorial  states “Offers further capabilities in .. project finance.” Its 2021 editorial added :  “It is a highly efficient team which always offers timely support.” 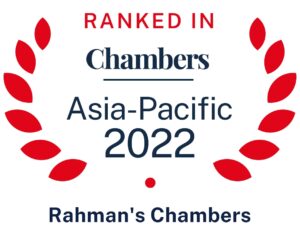 Rahman’s Chambers has been consecutively ranked for Corporate & Finance.

“…high-level opinion of them, with one of their strengths being a commitment to delivering on time” Mr. Rahman has in-depth and specialized knowledge on banking laws and regulations pertinent to his two years working experience in central bank as a member of legal counsel for A Hossain & Associates with lawyers from leading law firm of France, Gide Loyrette Nouel and leading law firm of India, Fox Mondol in a world bank-financed project on Banking laws.

The Chambers or its lawyers were involved in the following laws and regulatory drafting works for Central Bank:

We are Unique because:

While working in the central Bank strengthening project for A Hossain & Associates in 2004 to 2006, Mr. Rahman was involved in drafting of several circulars, regulation and guidelines along with other renowned lawyers from Fox Mandal, India & Gide Loyrette Nouel, France on several matters including banking regulatory, money laundering, credit information, supervision, foreign exchange, Islamic banking etc. This in-depth knowledge and experience of Mr. Rahman clearly give an extra edge compared to other competitors in the market.

The Chambers have deep knowledge as to banking laws as it was involved in translating the proposed Bank Company Act 2009, Bangladesh Bank Act 2009 and Financial Institution Act 2009 from English to Bengali for Bangladesh Bank.

We have advised a leading group of companies over loan security and documentation requirements under Bangladesh Bank regulations and circulars. In particular, the legality and documentation involving mortgaging existing land for securing a second loan known as the “second mortgage”.

Chambers’ COVID-19 practice group on Banking and Finance advised a garments MNC on rules and regulations for availing stimulus package made available during the COVId-19 pandemic.

Mr. Rahman was involved in Drafting Islamic Banking Act 2006 and Islamic Banking Guidelines along with other reputed lawyers at CBSP. The firms understanding over Islamic mode of finance is notable as it often advised bank over their Islamic Finance policy from legal point of view.

Project Finance refers to off-balance sheet/non-recourse financing or sourcing of funds to long-term projects. One of the notable features is non-recourse financing wherein the company that takes up the project offers itself as a Special Purpose Vehicle (SPV). The SPV is formed to procure and manage all the funds that are received towards the completion of the project. Since the SPV is a limited liability entity, the lenders are only entitled to the assets of the project which may be the guarantee of completion and the expected future cash flows, if the company defaults.

The firm acted for lenders, in few, non-PPP, off balance sheet, project finances as follows:

The firm’s senior lawyers’ have deep understanding of regulation of projects finance from both banking and Government PPP/ Authority perspectives and due to their full-time work assignments with Central Bank and also Power Division . The related work experiences are as follows:

The firm’s senior lawyers’ have deep understanding of sponsor’s perspectives as they acted for major project sponsor company engaged in projects finance transactions involving BOT/BOO based PPP projects as follows:

The firm has long experience of advising banks on  several corporate and structure finance assignments.

Legal service in the area of banking finance and institutional investment is in high demand in Bangladesh. Our Central bank in specific situations allowing international banks and international agencies to give loans to local entrepreneurs. Legal service is often required on regulatory banking for such international banks and agencies. Beside syndicated loan, project finance local and foreign bank needs strong legal support. On the other hand, entrepreneurs often require legal support for regulatory issues, for example, foreign exchange, credit inflammation, general banking and finance regulation related matters. Bank and financial institutions take legal support from lawyers for security documentation, for example, mortgage, hypothecation, etc. and registration of the same. Specialized financial institutions take expert legal support for venture capital financing, equity investment, Islamic finance, offshore banking, etc. Complex transactions and investments for e.g. factoring are now slowly becoming popular due to the liberal approach taken by the central bank in recent years. Expert legal support is crucial for such transactions. For both borrower and lender recovery, related litigation is a common issue where they both require continuous legal support.

The value of law reports in the legal profession cannot be overemphasized. They can be regarded as the life-wire of the legal profession. We have a rich library with a mixture of printed and online legal databases. We have printed version of All England Commercial Cases, Indian Digest of  Supreme Court cases, and most law reports of Bangladesh. We have a rich collection of international and local textbooks on Banking and finance matters. We subscribe to the online legal database Manuputra providing access to most reputed law reports. Read more

We have served central bank, Bangladesh Bank from 2008- 2015 on several transactions matters. Besides, we used to work for a number of commercial local and international banks e.g. The City Bank Ltd, Bank Al-Falah, Dutch-Bangla Bank Ltd, and so on. How we work for a limited number of Banks focuses on more complex matters for banks, international organizations and corporate clients.

We have formed a project finance practice group comprising legal and non-legal personnel.  Our expert team of consultants plays a critical role in providing end to end service to the client in project finance matters.

Unlike any other law firm in Bangladesh, we have almost the same number of highly skilled and efficient management personnel as that of lawyers. For Banking matters, our Accounts department plays a very important role. 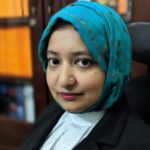 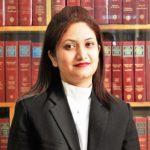