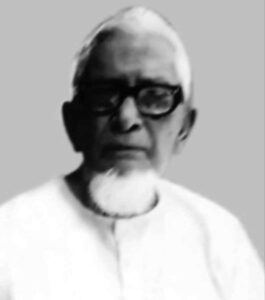 Mr. Shamsuddin Ahmed was born in Pachbari village, Dinajpur district in 1899. He passed his matriculation from Dinajpur Zilla School with first division in 1921. In 1923 he completed IA from Carmichael College, Rangpur one of the oldest college of Bangladesh. Later, in 1925 he completed Bachelor of Arts from Calcutta University and LLB in 1927.

Mr . Shamsuddin Ahmed awarded by Bangladesh Bar Council for completion of 50 years of practice life in 2003.

Mr. Ahmed enrolled as an advocate with Bar Council under Calcutta High Court on 10th June 1929 under undivided India. After creation of High Court of judicature for East Bengal at Dhaka in 1947, Mr. Ahmed listed as the very first enrolled advocate in 1953 under Dhaka High Court, Dinajpur Zone and same continued after establishment of Bangladesh (then East Pakistan) Bar Council in 1965. Initially, he practiced law at Balurghat, Dakshin Dinajpur, West Bengal for sometime before partition. Later he continued his law practice at his home town at Dinajpur in the area of mostly land and other civil matters. He was a lawyer of Bangladesh railway and few nationalized banks for long time. Mr. Ahmed was a renowned legal practitioner of his time. He was awarded by Bangladesh Bar Council for completion of 50 years of practice life in 2003.

Mr Ahmed established a college and were involved in many other philanthropic work throughout his life.  Mr. Ahmed received Advocate Abdus Salam Mia(Nana Bhai) Memorial Award 2002 from Hon’ble Mr. Justice Abu Sayeed Ahammed, of Appellate Division of Supreme Court of Bangladesh. A road, Advocate Shamsuddin Sarak, in Dinajpur is named in his memory. Mr Ahmed expired on 17th Ramazan 1424 or 14th October 2003 leaving behind sons, daughters and huge admirers.