[source: Textile focus] Korea and Bangladesh maintains a longstanding diplomatic and bilateral economic relation since independence of Bangladesh. Korea has been endowed with rich heritage of industrialization and five percent share of global trade. South Korea has been globally recognized for its unique productivity technique and immense strength in Shipbuilding, Electronics, Semi-conductor and automotive industry. The unprecedented quality and... Read More 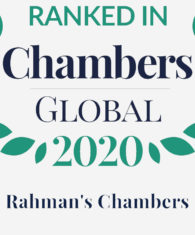 POWER SECTOR RELATED ARBITRATION IN BANGLADESH The Globally Autonomous Theory (Sui Juris) is gaining popularity for arbitration which basically means that arbitration is a private procedure mostly based on agreement between the parties, which has nothing to do with national law and national legal system. International community supports arbitration as it is a business demand. From time to time different... Read More

INVESTMENT ARBITRATION OF BANGLADESH Over centuries it is a well-established international principle that every state is entitled to enjoy absolute immunity against trial (Jurisdiction) & Judgment & Order (Execution) of any foreign Court. Actions against state as a party to a foreign procedure could only be brought with their consent. To limit the effect of the said doctrine in particular... Read More

ARBITRATION UNDER INTERNATIONAL LAW The modern history of international arbitration is generally recognized as dating from the so-called Jay Treaty of 1794 between the United States of America and Great Britain. Under the Treaty of Washington of 1871, the United States and the United Kingdom made few head of states as appointing authority of a five-member tribunal.   The Hague Peace Conference... Read More