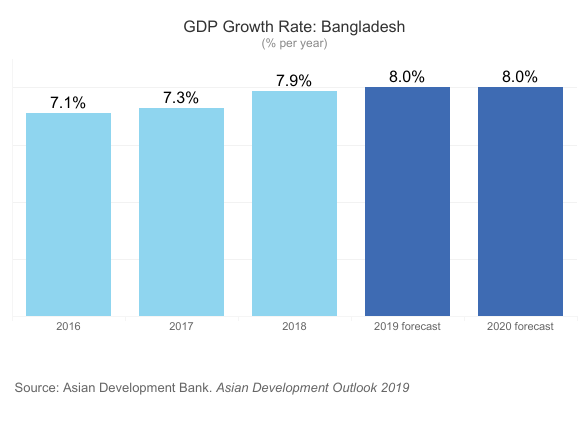 Bangladesh achieved an economic landmark last week when the United Nations Committee for Development Policy (CDP) recommended that the country graduate from the least-developed-country categorization that it held for the 50 years since its independence. Consequently, the Wall Street Journal (WSJ) has admired Bangladesh for the continuous economic strides it has made in recent years. It said that Bangladesh is notable in South Asia for being the closest proxy for the successful development models seen at various stages in South Korea, China and Vietnam that are the instances of moving countries from very low-income levels into middle-income status. It mentioned that Bangladesh’s exports have risen by around 80% in dollar terms in the past decade, driven by the booming garment industry, while India and Pakistan’s exports have declined marginally. Bangladesh’s exit from LDC status is probably a sign of further progress ahead and a shot across the bow of other South Asian neighbors taking a very different approach to development.

The Committee for Development Policy held its 23rd Plenary Session from 22 to 26 February 2021. During the meeting the CDP conducted the triennial review on the LDC category, recommending Bangladesh, Lao People’s Democratic Republic and Nepal for graduation from the list of LDCs. The UK’s Centre for Economics and Business Research (CEBR), an international independent economic forecasting and analysis firm has projected in a report dated December 26th that Bangladesh’s economy will be 28th largest in 2030 and 25th largest in 2035. It has said Bangladesh’s economic ranking in 2021 will be identical to Austria, i.e. 41st out of 193 countries to that of 2020. Bangladesh ranked 59th in 2010 and 48th in 2015. The CEBR in its report also said by 2025, the ranking of Bangladesh will improve significantly to the 34th, the position currently held by African country Egypt. The report said Bangladesh’s annual rate of GDP will accelerate to an average of 6.8 per cent between 2021 and 2025. Bangladesh had a PPP [purchasing power parity] adjusted GDP per capita of US$5,139 in 2020, making it a lower-middle-income country in the world. According to the forecast, the country’s GDP at local currency at constant prices will stand at Tk 11,983 billion ($313 billion) in 2021. By 2025, it will go up to Tk 15,979 billion ($420 billion). By 2030, the GDP at local currency at constant prices will stand at Tk 21,893 billion ($594 billion) and by 2035 at Tk 29,995 billion ($855 billion). The GDP at the current prices of Bangladesh will stand at $338 billion in 2021, $488 in 2025, $760 billion in 2030 and $1.2 trillion in 2035. The CEBR report said Bangladesh’s economy enjoyed a strong rate of GDP growth in the years leading up to the COVID-19 pandemic, despite a modest rate of population growth, which averaged just 1.0 percent per year over the past five years. It added that government debt as a share of GDP rose to 39.6 percent in 2020, which remains a low level. The government operated a fiscal deficit of 6.8 percent in 2020, facilitated in part by the low debt to GDP ratio which, the report said, has bolstered the economy in the past months.

Bangladesh came 168th in the World Bank’s 2020 Ease of Doing Business rankings (173rd in 2016), suggesting that the regulatory environment is not conducive to a thriving private sector. However, the World Bank did not release ranking for 2021 following a data controversy.

As per the report, the USA is the number one economy out of 193 nations, followed by China. Japan is the third-largest economy while Germany is the fourth and the UK is the fifth-biggest economy as per the latest ranking.

WSJ marked that back in 2011, Bangladesh’s GDP per capita in U.S. dollar terms was 40% below India’s. The factors in the country’s favor as far as its development model goes are – a very young demographic structure, a continued competitive edge in terms of wage levels, strong and rising female labor-force participation especially relative to the rest of South Asia. There are some meaningful potential hindrances as well, like Bangladeshi export growth is well below that of Vietnam or Cambodia, where exports have more than tripled and more than doubled respectively over the past 10 years. Its export industry is still overwhelmingly focused on garment manufacturing. It recommended Bangladesh to transition toward higher-value forms of manufacturing and exporting as Vietnam has done. The country’s economic complexity, ranked by Harvard University’s Growth Lab, is 108 out of the 133 countries measured. Like India, Bangladesh also finds itself outside of major Asian trade blocs, e.g. it isn’t a member of the Association of Southeast Asian Nations, or the Regional Comprehensive Economic Partnership or the Comprehensive and Progressive Trans-Pacific Partnership. To diversify its manufacturing exports greater participation in intra-Asian supply chains and a closer economic relationship with its neighbors to the east is required.