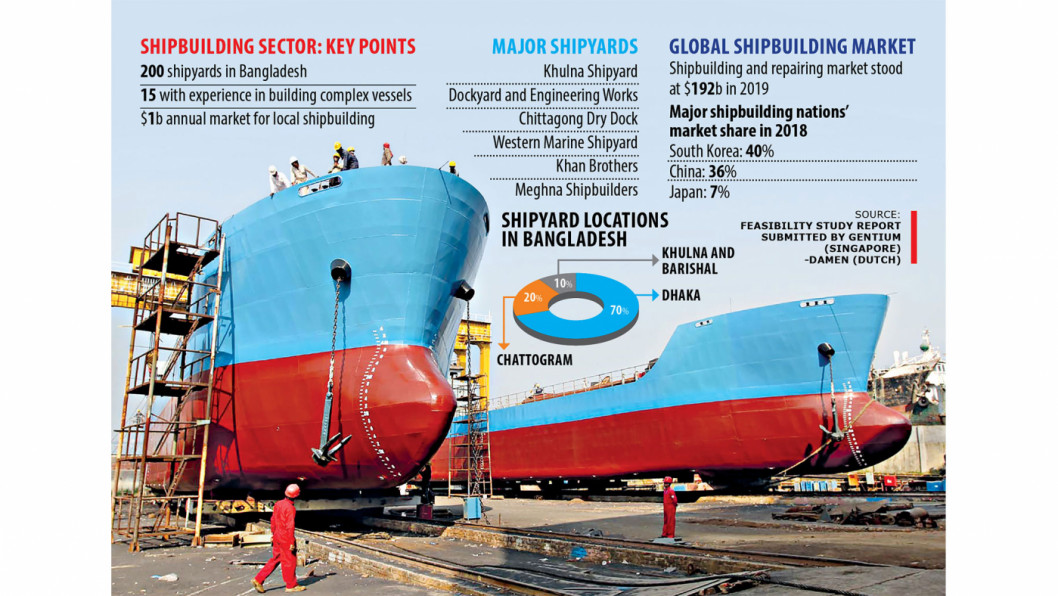 Biggest FDI in the offing for Shipbuilding

SUMMARY: The government will soon embark on an alliance with foreign investors with the intent to lay the foundations of a shipbuilding facility.

The government of Bangladesh is just one step away from attaining its colossal objective to construct a state-of-the-art shipyard with the biggest foreign direct investment (FDI) of $1.58 billion. This tremendous plan of action will be carried out at Payra seaport in Patuakhali.

At a meeting with Industries Minister Nurul Majid Mahmud Humayun, officials from Gentium Solutions, a Singapore and Australia- based company, and Damen Shipyards Group, a Dutch company, proffered the idea of this project proposal.

The Bangladesh Steel and Engineering Corporation (BSEC) will allot land to Gentium Solutions and Damen Shipyards Group will build the shipyard. These ships will be constructed for merchants and passengers.

The ministry, in a press release, asserted that this will be the highest FDI ever if the project does in fact get effectuated.

The two foreign companies composed a feasibility report and presented it to the ministry at the meeting. This report was composed in 2020 after they had signed a memorandum of understanding (MOU) with BSEC.

Besides, the country already has nearly 200 shipbuilding yards that make vessels for both native and foreign buyers.

The reports arrayed that Bangladesh has a $1 billion local market for shipbuilding per annum and the amount for universal market stood at $192 billion in 2019 with Japan, South Korea and China possessing most of the market shares. The report also enunciated that it will assist the government’s project by manufacturing vessels of top-notch quality for exportation.

Nurul Majid Mahmud Humayun verbalized that Bangladesh desires to be a shipbuilding nation and hence, it will supply all sorts of support, be it land or anything else, for the purpose of instituting a world-class shipbuilding yard.

Adviser of Gentium Solutions, Md Kaikobad Hossain, asseverated that the feasibility report was executed by a multinational professional services provider, Ernst & Young. He further stated that, as soon as they receive the final signal, the Gentium-Damen partnership will immediately get on the duty of developing land. This may take approximately three years. Even during the development of land, the work of shipbuilding will still go on by way of renting shipyards at Khulna and Chattogram.

Damen has a target of exporting vessels to 17 different countries which will have an imperative effect on the economy of Bangladesh. Damon is a roaring success as it has experience of 90 years in shipbuilding and it also has 6000 ships under its belt. It will be very profitable for Bangladesh to have workers with such enhanced skills from Damen and Gentium.

The consortium declared the final proposal of an investment of Tk.14,000 crore in the project for which, the government has already allocated land near the Payra port. The land that the government has earmarked is rough of 101 acres.

Picture and Article Source :  The Daily Star;  The Business Standard