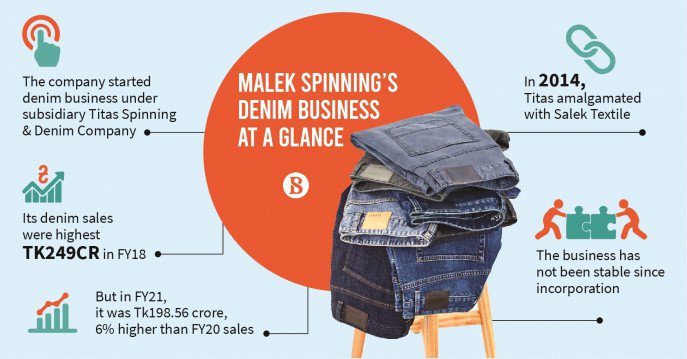 Due to the incurred loss of Salek Textile Limited, the Parent Company Malek Spinning is selling its denim unit’s assets to pay off the liabilities.

Malek Spinning Mills Limited, a New Asia Group company, has decided to close the denim bottoms production unit of its subsidiary company, Salek Textile Limited, due to business instability since the unit’s inception.

As a subsidiary company, the control of Salek Textile Limited lies with Malek Spinning Limited. Malek holds the control as a parent company or holding company.

Malek Spinning’s directors also decided at a recent board meeting to sell the denim unit’s assets in order to pay off the subsidiary company’s liabilities.

Due to repeated losses and limited demand for its products, Malek Spinning has decided to close the RMG business of its subsidiary Salek Textile Mills.

Due to accumulated losses and the expiration of the lease agreement of the factory building and premises, the board of Malek Spinning approved the closure of the readymade garment unit with effect from December 31, 2021, according to the company’s regulatory filing on the Dhaka Stock Exchange’s (DSE) website yesterday.

Salek Textile is owned by Malek Spinning, which owns 97.925 percent of the company.

According to the company’s annual report, the RMG plant has a capacity of producing 66 lakh garment items per year.

According to Syed Saiful Haque, Malek Spinning’s company secretary, the unit produces some special types of denim garments that have fallen out of favour in the international market.

The unit’s liabilities will be settled by selling the unit’s assets, such as factory plant and machinery, and borrowing from Salek Textile.

According to the disclosure, Malek Spinning will incur no costs in connection with the settlement of the liabilities. Malek Spinning shares closed 3.19 percent lower on the DSE yesterday at Tk 27.30.

Customers’ increased and costly compliance standards, new regulations regarding building and fire safety, the government’s high wage rate, and the price hike of power and gas had a direct negative impact on the cost of production, the price of products, and export revenues, he said, making survival difficult.

Despite the negative impact of the Covid-19 pandemic, Malek Spinning was able to increase its net profit due to an increase in turnover in 2020-2021.

The company said in a filing with the Dhaka Stock Exchange on Sunday that the board of directors has approved the closure of the textile unit with effect from December 31, 2021 due to accumulated losses and the expiry of the lease agreement for the factory building and premises.

The paid-up capital of the company is Tk 1.93 billion, the authorized capital is Tk 3.0 billion, and the total number of securities is 193.60 million.

According to DSE data, the sponsor-directors own 47.34 percent of the company, while institutional investors own 24.09 percent and the general public owns 28.57 percent as of October 31, 2021.