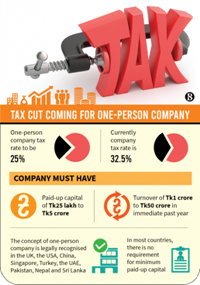 One Person Company registration starts from May 23, Tax rate cut to 25% from 32.5% likely

The Registrar of Joint Stock Companies and Firms (RJSC) has started incorporating One Person Company (OPC) — a new type of business entity in the country — from May 23, 2021. To encourage the foreign enterprises and sole proprietorship, the government is going to offer a tax exemption through a 25% cut in the upcoming national budget for fiscal 2021-22.

One person company is commonly seen in the advanced countries. It’s very useful for small enterprises to run their business more systematically. Keeping the national interest in mind, the government has passed the Companies Act (2nd Amendment) Bill 2020 in November 2020, which particularly emphasizes forming the OPCs in the country which is available for a long time in India and Pakistan.

A one-person company is formed with only one person who does not require having multiple board members. After forming the company, that company will be considered as a separate artificial person or entity and as a going concern. According to the Companies Act, an OPC has to have a minimum paid-up capital of 25 lakh taka and a maximum of 50 lakh taka.

However, the minimum paid-up capital is going through some controversy among the experts who told The Financial Express that it is too high for the small entrepreneurs. Dr. Masrur Reaz, Chairman at the Policy Exchange of Bangladesh and Abul Kashem Khan, chairman at the BUILD has kept their valuable opinion against it. As it has violated the objective of launching such a system, it is hoped that the government is going to make a change on it.

To welcome the concept, the government has already taken an initiative to exempt the tax to 25% whereas the tax rate for the unlisted companies is 32.5%. M Masrur Reaz said, ‘the government has taken a good initiative to reduce corporate tax for OPCs as the rate in Bangladesh is higher than in other countries. He added that “The size of our informal economy is very big but we cannot take advantage for not being able to formalize it. The Tax exemption will pave the way for incorporating the formal economy.

The transfer and handover of the shares of OPC are also simple. If the sponsor of the OPC dies, then as per the memorandum concerned, the nominated person will get the full share. And if the OPC sponsor wants to hand over the shares of this kind of company, then according to the law, he has to be present to sign the handover papers through the commission.

Increasing entrepreneurs, attracting more investment, boosting formal enterprises instead of trade license-based business were the key objectives of the amendment to the Companies Act in 2020, said Reaz.  He was involved in the law-making process of incorporating OPC into the Act.

The Register of Joint Stock Companies and Firms has developed software for its website to begin registration online in March for opening an OPC. The process will be restarted soon after controlling the pandemic situation. Then the small enterprises will be able to register online for the OPC. The minimum turnover of such a company in the immediate past year will have to be TK 1 crore to TK 50 crore. If the paid-up capital and turnover exceed the amount, the OPC can transform into a private limited company or in some cases into a public limited company

Picture from: The Business Standard