Mr. Mohammed Forrukh Rahman is one of the leading legal practitioner of Bangladesh. Chambers and Partners 2022 Asia Pacific ranked Mohammed Forrukh Rahman for Corporate and Finance (Band II) for consecutive four years and states “particularly recognised for his expertise in shipping law matters in Bangladesh, while he also assists clients with M&A and employment law. Market sources describe him as “a very competent lawyer.”

Chambers and Partners 2022 Asia Pacific also ranked Mohammed Forrukh Rahman for Dispute Resolution ( Band III) for the second time and stated “a well-established dispute resolution lawyer in Bangladesh. He is particularly praised for his knowledge and experience in arbitration, and he has expertise in bankruptcy, construction, energy and shipping cases. A client describes him as “very adept in his profession” and highlights the “wide exposure and knowledge” he is able to draw on.“

In 2022, he has been named as one of the top 50 lawyers of Bangladesh in Asia Business Law Journal’s A-List Lawyer. In the same year, Mr. Rahman has been appointed as a member of the International Chamber of Commerce (ICC) Commission on Arbitration and ADR, Paris, France by the ICC National Committee of Bangladesh for three years.

Court of Bangladesh. He was called to the Bar at Hon’ble Society of Lincoln’s Inn in 2003. He obtained Master of Laws (LL.M.) Degree with specialization on International Disputed Resolution with merit from University of London, Post Graduate Diploma in Laws (PGDipLaw) with specialization on Maritime Law with merit and Post Graduate Certificate in Laws (PGCertLaw) with specialisation on Commercial & Corporate from the same University. Mr. Rahman, is a Fellow of Hong Kong Institute of Arbitrators (FHKIArb) and Member of Singapore Institute of Arbitrators (MSIArb). He is a panel arbitrator of SAARC Arbitration Council (SARCO) and Shenzhen Court of International Arbitration (SCIA), China also a CEDR (UK) Accredited Mediator. He passed LLB from the University of London in 2002  and BVC from the University of Law, London in 2003.

Mr. Rahman has altogether 16 years of work experience as an specialized in the field of shipping, construction & cross-border works covering both contentious and non-contentions matters. As a managing head he also oversees the works of other divisions like Corporate & Finance and Dispute Resolution. For the last 12 years, he leads the firm, Rahman’s Chambers. Previously, he worked with Lee, Khan and Partners and also A Hossain & Associates, Dhaka office, the Chambers of Mr. Ajmalul Hossain QC from 2004 to 2006. Mr. Rahman was a Legal Consultant of Power Cell, Power Division, Ministry of Power, Energy & Mineral Resources and also a member of Legal Counsel, Central Bank Strengthening Project of Bangladesh Bank.

Mr. Rahman is now one of the leading practitioner in Bangladesh, ranked by Chambers Asia Pacific in the field of Corporate, Finance, Shipping and he is also ranked by Chambers Global for international works involving both contentions and non contentious matters.

The Head of Chambers is responsible for the overall affairs of Rahman’s Chambers in its entirety, whether it is legal issues, management affair, client handling etc. Out of our 5 Practice Divisions comprising 9 (Nine) Practice Departments, he leads one or two of them. The performance of divisions and departments which are lead by other senior members, are routinely assessed by him. He oversees the management assisted by supervisor, coordinator and attache'(s) of branches and experienced management staffs.

Mr. Rahman is the head of the International Division. His Master of Laws (LL.M.) degree with specialisation on International Dispute Resolution from the University of London gave him insight into international law, international arbitration, international trade laws etc. In 2022, Council of Shenzhen Court of International Arbitration (SCIA), has engaged him as an arbitrator of SCIA and included him into the SCIA Panel of Arbitrators with a term of three years from 21 February 2022 to 20 February 2025. In 2018, Mr. Rahman has been appointed as a panel arbitrator of SAARC Arbitration Council (SARCO) upon nomination from the Government of Bangladesh and BIAC. Mr. Rahman obtained his Fellowship from Hong Kong Institute of Arbitrators (FHKIArb) in 2017 and  has been recognised as a full Member of Singapore Institute of arbitrators (MSIArb) in 2019. He passed Accredited Mediator course from CEDR, UK in 2013. Mr. Rahman has been involved in a number of international arbitration, cross border shipping and commercial litigation involving private international law issues. He advised clients over cross border shipping issued involving India, Pakistan and Bangladesh.  Mr. Rahman is a member of International Bar Association and International Division of New York State Bar Association. Several inbound (Bangladesh) cross border litigation e.g insolvency,  acquisition etc and also issues involving International law such as taxation, investment, etc were handled by him. Starting with the most recent, notable works of Mr. Rahman are as follows: 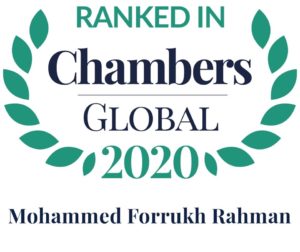 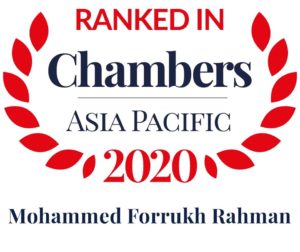 “Additionally has a recognised practice in such areas as business formation, projects and energy, real estate..”

– Ranked (Band II) for Corporate and Finance by Chambers & Partners 2021 which includes constructions and investment works.

Mr. Rahman is the Head of Construction & Investment Division. He was a full-time Legal Consultant, Power Cell, Power Division, Ministry of Power, Energy and Mineral Resources, Dhaka (2007-2008). Mr. Rahman handled several major corporate transactions such as acquisition of shares and also land. He advised G2G, PPP and non-PPP projects involving power, energy and other infrastructure, EPC and O & M contractors.  As a team leader he has been involved in several investment deals. Starting with the most recent, notable works of Mr. Rahman are as follows:

Mr. Rahman is the head of Shipping Division. Mr. Rahman completed Post Graduate Diploma in Laws (PGDipLaw) on Maritime Laws with merit from University of London. He is a member of Singapore Chamber of Maritime Arbitration (SMCA).  As a counsel, he appeared before Admiralty Court of High Court Division in several shipping matters e.g. collision, bunker claim, mortgage claim, ownership disputes, charter-party disputes etc. He was the lead counsel in the ground breaking case namely Freight Management and 16 others vs. Bangladesh Bank involving legality of House Bill of Lading. Starting with the most recent, notable works of Mr. Rahman are as follows: “he has expertise in bankruptcy, construction, energy and shipping cases.”

We can therefore highly recommend the legal services of Mr. Rahman to any party, which needs legal support in Bangladesh in matters relating to international trade, financing and transport.

We were impressed with the expertise and knowledge of Mr. Mohammed Forrukh Rahman in particular with international arbitration on maritime matters.

he is a knowledgeable and very co-operative person. I have discussed many issues with him and he gives me the right suggestions.

– Ranked (Band II) for Corporate and Finance by Chambers & Partners 2019.

Mr. Rahman, as a head of chambers, oversees the work of Corporate and Finance Division, which is lead by Divisional and Departmental heads, being specialized and experience lawyers in their respective field of law. He completed Post Graduate Certificate in Laws (PGCertLaw) with specialization on Corporate & Commercial laws from University of London. Mr. Rahman acted as a member of Legal Counsel, Central Bank Strengthening Project, Bangladesh Bank for A Hossain & Associates( 2004-2006). At the beginning while the Chambers was small and growing, Mr. Rahman was in charge of Corporate and Finance Division and was directly involved in many important assignments for a longtime. He is Ranked (Band II) for Corporate and Finance works by Chambers & Partners 2019 and 2020. As the firm grew along-with the abilities of Senior and junior members of the Chambers, the work is fully delegated while Mr. Rahman in his capacity as head of chambers only oversees, navigate and regulate the work. The notable works of Mr. Rahman are as follows:

Mr. Rahman presently as a head of Chambers oversees the work of Dispute Resolution Division, which is lead by department head and other senior and experienced member of the Division. While the Chambers were small most contentious matters were under this Division. As the firm grew, specialized Division and Departments were created to cater the need of the clients, covering both contentious and non-contentions maters. Presently Dispute Resolution Division mostly deals with all contentious matters which doesn’t fall under specialized categories, e.g. constitutional, administrative, general Insurance, negligence, white color crime, local investment arbitration, real estate etc. At early stages, since  2006 to 2018, Mr. Rahman argued as a lead counsel for last 12 years for different clients in a number of cases involving different issues e.g natural justice, white collar crime, debt recovery, insurance, credit information, tenancy, labour and employment etc in different forum including High court, judges court, Arbitral Tribunals and Other Tribunals. Out of the total number of cases where he appeared, at least, two dozens of cases have found its place in the leading law reports of Bangladesh. While the contentious matters under this Division is mostly delegated, as Mr. Rahman focuses on more specified matters,  Mr. Rahman as a head of chambers navigate, supervise other members. The notable works of Mr. Rahman are as follows: 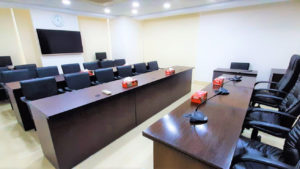 Forrukh Rahman of Rahman’s Chambers moved for the plaintiff while Abdul Baset represented the defendant.

If you need a face to face consultancy /teleconference/ consultancy over email/phone or you are not sure about the services you need, you may fill in the form below. More information can be found at our Billing and Payment page. In all other cases please visit our related practice area and fill in the form-request a quote or contact us.

(2nd Monday of every month)
Prior appointment is required.